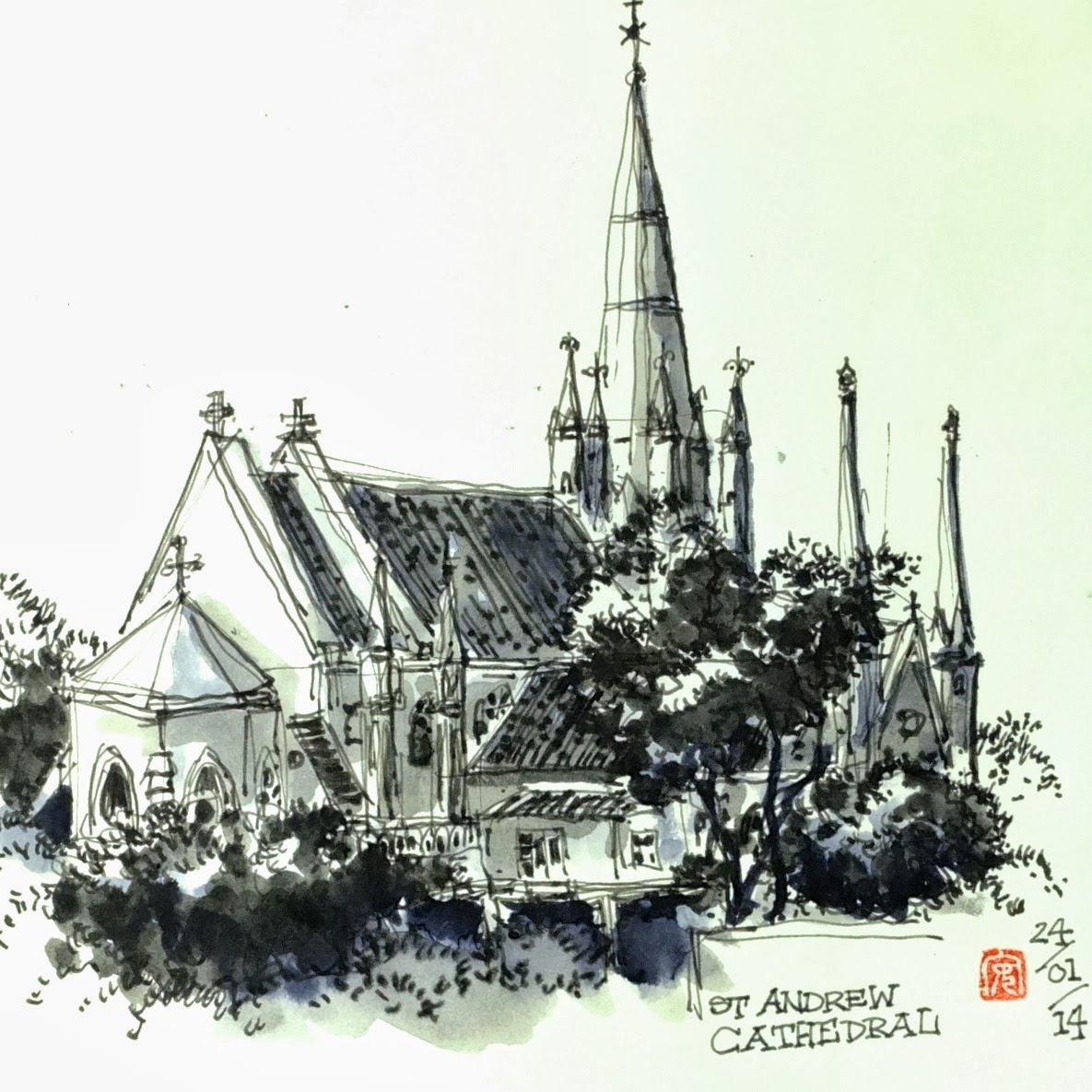 St Andrew Cathedral, Singapore
Designed by George Drumgoole Coleman, the original Saint Andrew's Church was built from 1835 to 1836. The second Church of Saint Andrew was designed by John Turnbull Thomson and built in circa 1842. Rumours of unhappy spirits and damage caused by two lightning strikes in 1845 and 1849 resulted in its closure in 1852 and subsequent demolition in 1855.
Colonel Ronald MacPherson, the Executive Engineer and Superintendent of convicts, designed the new church. To cut costs, Indian convict labour was used, as it was for many buildings of the day. Daniel Wilson, bishop of Calcutta, laid the foundation stone on 4 March 1856, and the first service was held on 1 October 1861. George Cotton, who succeeded Daniel Wilson, had the honour of consecrating the cathedral on 25 January 1862. In 1869, it was transferred from the jurisdiction of Calcutta to the Diocese of Labuan and Sarawak and, in 1870, Archdeacon John Alleyne Beckles consecrated it as the Cathedral Church of the United Diocese.
Saint Andrew's Cathedral is owned by the Synod of the Diocese of Singapore, and is a centre for Singapore's Anglican Mission. In 1856, Saint Andrew's Mission launched the first Anglican evangelical outreach in Singapore. The first Anglican bishop, The Right Reverend J. Ferguson-Davie was appointed in 1909.
In 1942, shortly before the fall of Singapore to the Japanese, the cathedral served as an emergency hospital.
An archaeological excavation was held on its grounds in 2004 by the National University of Singapore.

Saint Andrew Cathedral was gazetted as a national monument on 6 July 1973. The National Museum of Singapore is the nation's oldest museum established in 1887 when Singapore was part of the Straits Settlements. Reopened in December 2006 after three years of extensive restoration, the museum – a National Monument – now presents permanent exhibitions on Singapore history and popular culture, alongside changing exhibitions on world history and popular culture. It is Singapore’s largest and most modern museum, using state-of-the-art multimedia technology to bring history to life.

Visitors to the permanent galleries will come up close and personal with national treasures, such as the mystery-shrouded Singapore Stone and 14th century gold ornaments unearthed from nearby Fort Canning Hill. They will also learn more about Singapore’ s multi-racial and multi-religious society, and how popular culture has evolved over time.

Alongside the permanent galleries, the special exhibition galleries provide Singaporeans and visitors with the opportunity to learn more about world heritage and cultures here in Singapore, through major touring and special exhibitions presented in partnership with museums worldwide.
Posted by Francis THEO at 03:24